Some programmers markedly object to the presence of 1-based array indexing in programming languages. This happens every time a new language appears which uses it, the latest being Julia. But why?One of the arguments is because 0-based indexing is more natural. Really? Ever start counting anything at 0? How many eggs are in an egg carton – ahhh 12?  But when I take out the first, is it egg number 0? 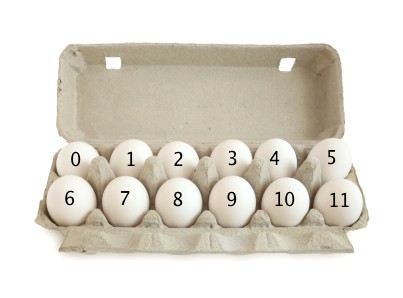 Starting array indexing at 1 *is* natural for counting. So an array with 100 elements will be indexed from 1 to 100, not 0 to 99. Zero-based indexing is more of an artifact of C than anything else. Languages like C and C++ use pointers to store data, so it makes more sense to have their indices start at zero. Finding an array element in contiguous memory is then easy.

Dijkstra in his article “Why numbering should start at zero“, argues 0 ≤ i < N is a “nicer” range than 1 ≤ i < N+1 and doesn’t really care for 1 ≤ i ≤ N. This really doesn’t make much sense – there are no aesthetic qualities associated with conditional statements. Guido van Rossum  gives a rationale for why Python uses 0-based indexing, which boils down to being “swayed by the elegance of half-open intervals“.  He does make a good point that splitting a string into three components using a[:i], a[i:j], and a[j:] is nice.  But one also has to like the fact that i:j implies from i to <j.

This site uses Akismet to reduce spam. Learn how your comment data is processed.